The Land’s End snow boots were out by the fire again this week! Remember the Friday Favorite a few weeks ago? Sophie decided the snow boots needed a new order and declared they made a pretty pattern. I laughed and had to take this picture … 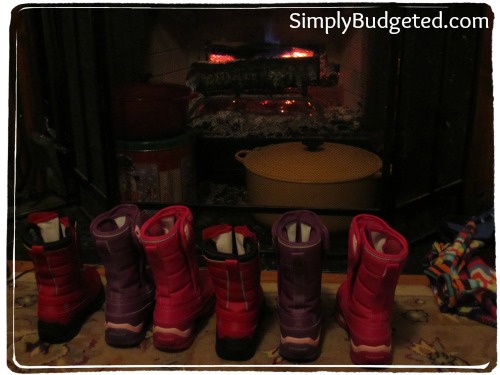 On Wednesday, we had 10 inches of snow … in just one day. The power was out for 13 hours at our house. We are lucky. Some of the other homes where we live aren’t expected to get power back until Monday! You will see two cast iron pots in that picture. One was melting snow for toilet flushing (we have a well) and the other was warming bottled water hoping for some hot tea! We lost one tree and part of our willow. I will get those pictures up soon. The snow yesterday was too deep for the kids to play much. Today they went out at least four times to play and run in the snow though … we probably had about 4 inches of snow left!

I do have to say that a major snow storm is not the best time for your husband’s bronchitis to flare up. I did manage to keep the fire going and even went out and feed the birds. Lunch was crackers and turkey I snagged from the fridge in a speed drill on how fast I could close the fridge door. I eventually shoveled the walk which was nice today because it dried out today with the sunshine we had! Oh and I managed to feed everyone leftovers for dinner since the power was back on by then and I could just heat it up.

The good news is that Brian went to the doctor today and came home with three prescriptions. Hopefully you see his posts here and over on This Cookin’ Dad soon. He needs to show up my attempt at Irish Soda Bread today. (It tasted great but looked a little rough!)

Hopefully this is the last time the snow boots line up in front of the fireplace this year. Now that we had a nice good snow, I am ready to see my daffodils!

Did you end up with snow this week? Are you ready for Spring? Leave us a comment and let us know!