We are excited to bring another guest post to you today from Andrea Woroch! 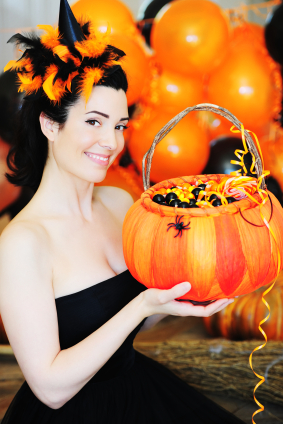 Halloween is now officially the second-highest grossing holiday of the year, right after Christmas. No doubt thrift shops come in for a major cut of that profit. Costume shops do pretty well, particularly since many are offering great deals and free shipping offers this year, but drugstores and big-box stores also enjoy the Halloween kaching!

In the end, who cares how much money merchants make off our favorite holiday? Finding just the right zingy costume is the best part of All Souls Eve, particularly if you can do it on the cheap. Here are 20 trendy ideas pulled directly out of the 2011 zeitgeist.

1. Tiger Mom
You gotta read the book to get this one, but those who kick into the joke will ROTFL. In “Battle Hymn of the Tiger Mom,” Amy Chua wrote about how Chinese parents are better at raising kids. Instead, it became a clash of east against west, with many complaining Chua’s strict rules were too hard on the kids. Either way, it made for an interesting story and could make a fun costume.

Here’s the recipe: Pick up a set of mommy clothes (including high-waisted jeans) and some face paints, then do your best at recreating a tiger face. For a special touch, add a wild wig of blond hair and fluff to the max.

2. Rebecca Black “Friday” Video
The songbird that foisted auto-tune-heavy “Friday” upon the universe deserves a touch of parody. A long, frizzy black wig (don’t forget the side part), a purple, sleeveless dress from Forever 21, piles of eye makeup and a headbouncing posse should do it. Oh, and don’t forget to memorize the lyrics to this insipidly repetitive song.

3. Angry Birds
Anyone hooked on this addictive Facebook, mobile phone and Google Chrome game knows the deathly attraction of the chirping birds and snorting green pigs. This could be a great group costume, but you can also select your favorite birdbrain and go it alone.

While you can make your own version, you might want to check out the 20-percent off deal offered by Spirit. Spice your costume up even further with a small slingshot, if you’re a bird, and a basket of eggs, if you’re a pig. Keep an eye out for Spirit Halloween codes for free shipping as Oct. 31st approaches.

4. Hipster Barista
Enough with the skinny black jeans and snobbish attitude! Everyone loves to hate their own snotty Starbuck’s manager. Now you, too, can be loathed by hundreds.

The costume is simple: To the aforementioned skinny jeans, add a black, v-neck T-shirt, black scarf (wrapped in trendy fashion about your neck), and a batch of rub-on tattoos. Voila! You’re ready to stick your nose in the air. If you’ve got a Che Guevara T-shirt, this is the time to wear it proudly. The best part of this costume is that it’s androgynous, so either males or females can be a Hipster Barista.

5. Garden Gnome
For some reason garden gnomes have become the kitch costume of the year, showing up everywhere from Mardi Gras to the Tour de Fat bicycle parade in growing numbers. Strangely, Pottery Barn Teen has a great version of the little pointy-hatted guy, and is currently offering 20% off Halloween costumes. Get a Pottery Barn free shipping code to save even more.

6. Hurricane Irene
Once considered a deadly force of nature, Hurricane Irene limped to the East Coast with little more than heavy rains and a will to survive. Sure there was lots of flooding, but the weather-weenie predictions happily proved to be wrong.

The costume is fairly simple. Just print out a bunch of satellite maps depicting hurricanes and pin them to your clothes. Then limp around all night blowing gently into friend’s faces.

7. Charlie Sheen
Halloween Mart has all the components for this absolute-must costume. Combine their Malibu Maniac Kit (black wig and “Two-and-a-half Men” shirt), IV bag of Tiger Blood, and tiger-skin-banded hat emblazoned with “Winning!” Pop on your own dark shades and you’re ready to ramble around shouting “Duh!”

8. Tron Guy
Remember Jay Maynard, who had 10 minutes of fame for his homemade Tron costume? Then he used up his last five minutes when Duck Brand adhesive tape made a Tronish commercial that ended up inside Maynard’s head?

You don’t have to know about this computer programmer, however, to recreate his costume. Take a set of long underwear, a bike helmet and Frisbees and create a Tron pattern with fluorescent-blue duct tape. If you really want to mimic Maynard, slap on a porn-stache and a pair of aviator glasses.

9. I Love Lucy
August saw the 100th birthday of Lucille Ball, the comedic genius who started a television empire with Desilu Productions company. You can Desi Arnaz your night with a Luuuuuucyyyy outfit from Drugstore.com. Find free shipping codes for the e-retailer, plus 30-percent off costumes at sites like FreeShipping.

10. Bronies
For some reason, there’s a contingent of male nerds out there who are addicted to the animated cartoon “My Little Pony.” Known as “Bronies,” these fanboys watch pretty pictures of ponies — with names like Twilight Sparkle, Fluttershy and Rainbow Dash — have magical adventures. Seriously!

The costume is simple: Buy several of the pony “action figures” and attach them to slacker clothing, i.e. sweatpants and a bagged-out T-shirt. Then wax eloquently about the pink aisle at Toys R Us.

11. Insane Clown Posse “Miracles” Video
Sick of rapping about murdering people with axes, the Detroit hip-hop duo released “Miracles” about the magic in the universe. The Posse rapped in X-rated language that made the video one of the biggest joke memes in 2010. For a wicked twist, go with the Saturday Night Live version.

The costumes are simple: Dress in all-white gangster togs, paint on a black-and-white clown face and you’re ready to rap about magic and miracles being “just there in the air.”

12. Bridezilla
If you’ve seen the WE Network show “Bridezillas,” it’s easy to believe all women in white have turned into raving maniacs. While some brides can get a bit out of hand under pre-wedding stress, nothing can touch the WE’s matrimonial disasters.

To turn yourself into one of these nightmare brides, wear a trashy gown from your local thrift shop and scream into your cell phone all night. Key phrases, “You’re out of the wedding” and “You’ve ruined the biggest day of my life!”

13. Hawaii Five-0
Here’s an easy one for lazy guys, based on the resurrected television show on CBS. Rock a pair of shorts and a Hawaiian shirt with some nifty shades, pick up a set of handcuffs at the costume shop and you’re good to go. (Surfboard is optional.) Now book ’em, Dano.

14. Republican Presidential Candidates
Watch just one of the Republican debates and you’ll have the costume down. Dark suit and a red tie for men and pearls for Michelle Bachmann imitators. Key phrases to push: Taxes, tax cuts and Ronald Reagan. This one is definitely better as a group costume.

15. “Entourage” Gang
Another group-costume concept, this one pays homage to the final season of HBO’s “Entourage,” featuring one movie star and his bro-mance with three homies (and one maniacal Hollywood agent). The costumes are pretty basic, but it’s the chemistry that will make this one come alive.

16. “The Big Bang Theory”
Speaking of TV shows ripe for the costume picking, the geeks from “The Big Bang Theory” are even easier to recreate. Take one skinny nerd in multiple T-shirts, add a shorter version in horn rims and a couple multicultural buddies and you’ve got your gang. Remember, the geekier the clothing the better, so hit up Goodwill for your Green Lantern T-shirt. The best accessory, however, would be an attractive blond.

17. “Bridesmaids”
You don’t have to replicate the “Bridesmaids'” movie cast; just follow the lead of so many modern bachelorette parties these days. The bride-to-be gets to wear a crown or goofy white veil. The bridesmaids all follow a common theme, like bobble headbands or goofy scarves or some such. Now go out and party!

18. Pirates
Johnny Depp has made the world safe for pirate costumes again, thanks to the “Pirates of the Caribbean” movies. Forget the eye patch, however, and follow the gorgeous movie star’s lead with a basic vest, white shirt, pants tucked into boots and lots of bangles, rings and scarves. Oh, and don’t forget the guy-liner.

Gals might go with a Penélope Cruz look: Big black hat with buckle, frock coat and much of the same look as Johnny, just without the dreadlocks. Grab a Target free shipping promo code and enjoy their great version of this look for the ladies.

19. Anthony Bourdain
Recreating Mr. “No Reservations” is easy as pie. Just wear a chef’s jacket and check pants (found at many thrift shops) then plop on a white wig. Can’t find the kitchen uniform? Bourdain is partial to blue polos and dress shirts with jeans.

The great part of dressing as the Travel Channel chef is that it requires you devour drinks and food all night. Non-party attenders can carry a frying pan and wine bottle to give their costume a “kitchenie” look.

20. Royal Wedding
Did you hear Prince William got married this year? If you followed the royal wedding closely, you don’t need much costume advice. Ladies wear a long, brown wig with a thrift-shop wedding gown and carry a white bouquet. Gentlemen have it tougher finding a red military jacket, but cardboard medals and a blue ribbon sash are easier. It also helps if your hairline is rapidly receding.

Andrea Woroch is a consumer and money-saving expert for Kinoli Inc. As a nationally recognized media source, Andrea has been featured among top news outlets such as Good Morning America, NBC’s Today, MSNBC, New York Times, Kiplinger Personal Finance, CNNMoney and many more.