We are excited to share our thoughts about the Boostcase!

What is the Boostcase?

The Boostcase is designed to be ON all the time because when the iPhone is 100% full (such as after recharging), the iPhone will draw power from the boost battery first. Once the battery in the case dies then the iPhone will finally use its own battery, otherwise it will be in standby and will not be used. This means that you will recharge your iPhone about half as much as you normally would, hence it will double the life expectancy of the battery. There is nothing wrong with leaving the case OFF and not using it until you want it, as this will also achieve the desired effect of doubling the amount of time to use the iPhone. However just note that to also increase the life expectancy of your iPhone battery we recommend leaving the case ON (it automatically turns on when you connect). 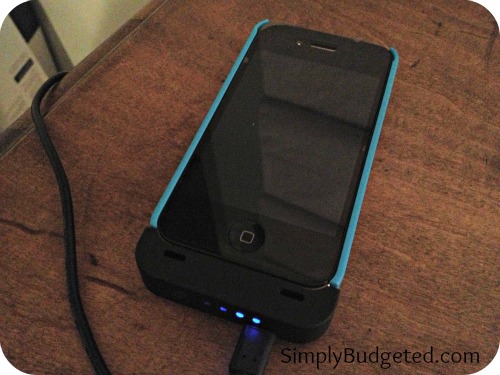 I love the Boostcase!  Beth thinks it is too heavy and too big, but I have to roll my eyes at her a bit because she keeps her iPhone in her purse all day.  I tend to keep mine in my pocket and, while it does give the phone a bigger footprint, I am more than willing to make the trade-off for all day Twittering, Facebooking, texting, etc.

I recently went to the Mixed Conference, a weekend retreat for food bloggers.  The signal at the hotel, when it did decide to show up, was extremely weak.  That means that my phone spent the entire day searching for a signal.  Normally, that would completely drain my phone.  Instead, the Boostcase kept my phone charged all day.  I was up and moving at around 7 that morning and did not go to bed until around 1 the next morning.  When I finally plugged my phone in for the night, the phone still had half of it’s battery left!  That was after all day on Twitter, taking pictures, texting, and searching for the elusive signal!  The best part was that, the next morning, it was all completely recharged.  That’s right!  The battery and Boostcase were almost completely drained and it took less than a full night to completely recharge them both!

All in all, I fully recommend picking up one of these.

We are excited that the folks at Boostcase have offered  to give a Boostcase to one of our readers too! Are you excited?! Good luck!!