Many thanks to STI Fleet Services for making this review of the 2014 Mazda 6 possible.  All thoughts and opinions are my own.

I love to drive.  Sometimes, when things start to get a little stressful, it’s nice to just go for a drive.  In a way, you leave all of the troubles behind, concentrating on the road, the feel and sounds of the car, any music that might be playing.  Eventually, by not dealing with the problems in the moment, you begin to approach them with a clearer head.

It’s really hard to do that with a minivan!

When I heard that we were reviewing the Mazda 6, I really didn’t know what to expect.  When I saw it in the driveway, I was pretty impressed.  I was told it was a sedan, but it looked way sportier than most of the sedans that I’ve seen.  Sitting inside is really just an experience.  The interior is stylish, roomy, quiet, and everything is pretty intuitive.  My favorite part about the interior was little knob right smack in the middle of the center console.  From there, you could control your phone, music, GPS, etc.  It’s a simple knob that spins and that you can push up, down, left, right, and center to enter your selections, but it keeps your arm at a comfortable level instead of constantly reaching for the screen.

The biggest inconvenience for me is the location of the cupholders and that the armrest in the center console slides and does not lock in place.  I would set my arm down and the armrest would slide into my drinks.  Even when I could keep the armrest back, trying to reach over and around the drinks to manage the console knob became kind of a pain.  For a long ride, I want to have a drink in the car, but the design of the center console is not kind to that decision. 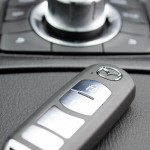 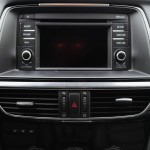 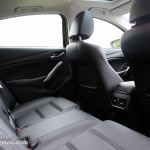 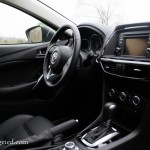 But how does it drive….

This really is the most important thing about a car like this, isn’t it?  If it doesn’t drive well, what’s the point?  Guess what?  It drives incredibly well!  It’s responsive, hugs tight to the road, and has a great turning radius.  It came with an automatic transmission and shifting paddles on the wheel.  So I had the option of driving in a manual style when I wanted to concentrate on driving, but the ability to shift back to automatic if I had too many distractions.  For me, that’s kind of nice in a family sedan!

One of my favorite features of the car is the cruise control.  The Mazda 6 actually has sensors in front, allowing you to set a preferred distance to the car in front of you.  The car will automatically slow down to the speed of that car.  It’s kind of nice if you aren’t in any hurry and traffic is flowing well.  It can be pretty obnoxious when you are passing someone around a corner and it barely catches them in the sensor, dropping you down 5-10 MPH and messing with the gear settings.  Still, I found myself using this feature over and over again.

Have you driven the Mazda 6?  How did you enjoy the ride?  Leave us a comment and let us know.