Being from Louisiana, I get a fair number of questions about the foods and traditions of the state.  One of the most iconic dishes from Louisiana is gumbo.  Gumbo is one of those dishes that is talked about, but can be pretty tough to find.  Everyone knows what it is, but so few people can tell you how to make it.  I’m here to demystify this dish and maybe teach you a little about Louisiana culture in the process. 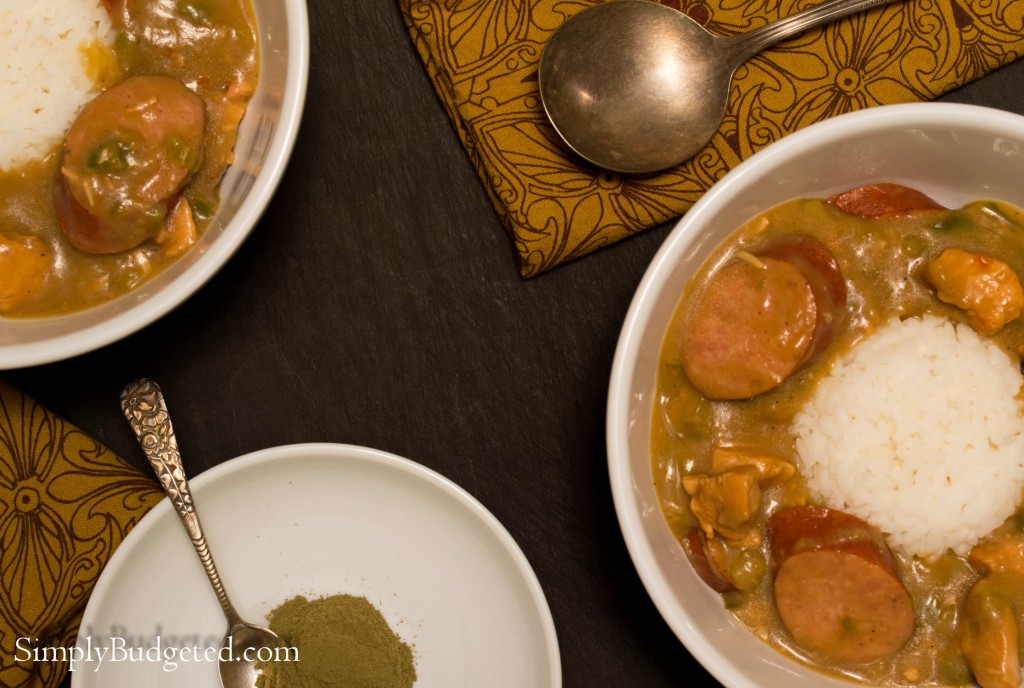 In Louisiana, there are two major groups of people, Cajuns and Creoles.  There’s an old saying that a Creole feeds one family with three chickens while a Cajun feeds three families with one chicken.  This really defines the difference between these two styles of cuisine.

Creoles culture evolved in the city of New Orleans as Europeans came to settle.  Greater diversity in the city and better access to markets led African and Caribbean influences to mingle with traditional cooking techniques and local ingredients to combine with ingredients imported from Europe.  Creole cooking is city cooking.  A cuisine of affluence and opulence, relying more heavily on butter, cream, seafood, tomatoes, and various spices.  It is a rich food prepared for a rich people.

Cajun culture evolved as evicted French settlers from Acadia (present-day Nova Scotia) settled in Central and Southwest Louisiana (a region now known as Acadiana).  These were poor settlers accustomed to living off of the land and just trying to get by.  In many cases, food was a community event with huge pots of gumbo or other dishes prepared for several nearby families.  Relationships were built over these meals and you can still find gatherings like these today.  This cuisine leans more heavily on oils or lard than on butter and the chosen meats are typically chicken and sausage, making it a point not to waste any part of the animal.  The spices are simple, but strong, lending a completely different side to the cuisine of Louisiana.

Even adjusting for the cultural variants in Louisiana, everyone’s gumbo is going to be a little different.  There are so many recipes out there that it can be overwhelming to choose.  Add to that the fact that most recipes have you making way more than your family could eat and it’s easy to want to pass on the dish altogether.  However, if you stick to the following formula, you’ll have a pretty successful base that you can change up as you see fit.

You take 1 part roux, 2 parts trinity, and 4 parts liquid.  That’s it!  This is the base.  After that, add sausage, chicken, shrimp, fish, okra, or whatever else you want.  It’s your gumbo after all! 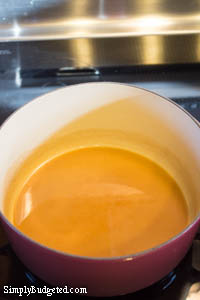 Your roux will be equal parts flour and fat.  The Creole use butter; Cajuns use oil or lard.  Cook that on medium-low for 15-20 minutes stirring constantly.  This is about how long it takes to drink a beer or two.  Seriously, you cannot stir too much!  The lighter the roux, the better it will thicken; the darker the roux, the more flavor.  Personally, I take mine just a little darker than the color of peanut butter, but some take it to a chocolate color.  Your gumbo, your taste! 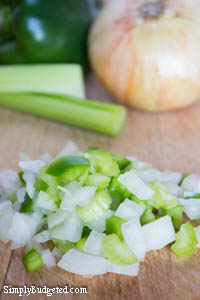 This is a big deal in Louisiana cooking, whether Creole or Cajun.  2 parts onion, 1 part bell pepper, and 1 part celery.  It’s similar to the French mirepoix or the Spanish sofrito in that it forms the basis for the flavors of the dish.

While the roux and trinity are pretty well standard and unchanging, the liquid that you add can be just about anything.  You might start with some tomato sauce or crushed tomatoes.  It’s up to you.  Chicken stock or shrimp or seafood stock are pretty common.  If all you add is water, you can still get some pretty good flavor because of the other base ingredients.  If you feel like your gumbo is getting a little too thick, just add a little more liquid.  The dish is pretty forgiving. 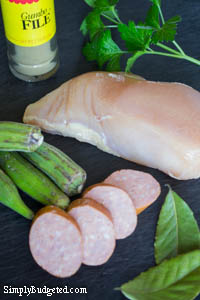 Once you have your base flavors, the sky’s the limit.  Chicken or sausage (specifically andouille) for a Cajun-style gumbo, seafood for more of a Creole-style.  If you are using meats, make sure you brown them up in oil before you start your roux.  You can add a lot of flavor right from the start.  Add in okra or gumbo file as a thickener, cayenne for some heat, or really, just about anything you want.  Why not replace some of your green bell pepper with red bell pepper or even some hotter peppers for more flavor?  The sky really is the limit.

If you are still looking for a specific recipe to get you started, feel free to check out the Mellott Family Gumbo.

How would you start off your gumbo?  Have any great experiences with it in the past?  Share your story with us.