This isn’t your typical New Year’s Eve post … mostly because it really has nothing to do with New Year’s Eve. It just fits because of the years mentioned. It is a post that has been on my list to write but it never made it to the top of the pile to write so here it is and thankfully it fits today anyway!

Back in March of 2011, our minivan died. It was an older, used minivan but it fit our family and ran … plus it was paid for already since we got it used (and cheap). We didn’t expect it to die when it did … we were all in it and about 40 minutes from our house. My parents thankfully rescued us since a tow truck does not fit 2 adults and 3 kids in car seats. We decided to suck it up and get a new van when we learned the cost to repair the old van was double its value. Did I mentioned that van payments were not in our budget, yeah, they weren’t. So we re-did the whole budget and managed to figure out a way to add a van payment. You want to talk about the whole Budget Pie changing … adding a van payment will certainly change your Budget Pie! We ended up with a Dark Cherry Pearl Honda Odyssey 2011 mini-van. We loved it. Yes, I said loved … as in past tense. Keep reading. 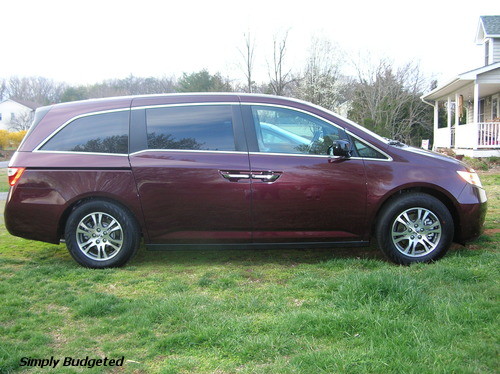 Then August 22, 2011 happened. Brian was taking Grace and tag-along Sophie to Grace’s five year check-up appointment. I stayed home with Matthew to do some work. I got the call and at first thought Brian said they weren’t going to make the appointment because there was an accident on the way there. The call dropped. I finally got him and back to only learn they were IN the accident. I rounded Matthew up and drove down there to sit in traffic to find our brand new van looking like this … 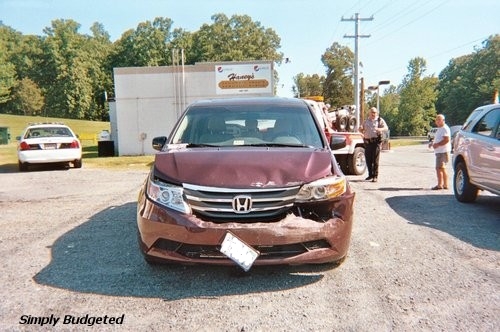 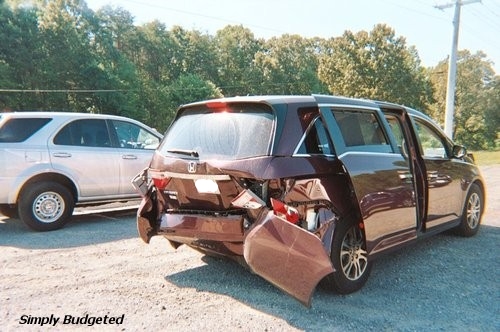 Everyone was fine in our van. The girls were in their Graco Nautilus seats and hardly felt it. Brian didn’t even think there was much damage outside of the van until he got out of it because of the way it absorbed the impact and crumbled. Crumple zones work was the lesson here! The inside of the van looked perfect. It was amazing. Brian and I were both amazed when started to empty it out of our belongings so it could be towed to see how far the back came into the trunk. The Odyssey has awesome trunk space and that is one of the reasons we love it. It was all gone. The back of the van was about 6 inches from the back seat where the girls were sitting. We feel so blessed it stopped there. I should probably add that Brian was in the middle of a 4 car pile up that wasn’t his fault. He and the two cars in front of him stopped because there was a two car accident in the road in front of them. The lady that hit Brian push him into the car in front of him and that car into the truck in front of them.  Oh and the insurance company replaced the car seats … I of course ordered new Graco Nautilus Car Seats from Amazon

and they arrived the next day … way before the new van!

So without a second thought, we went back to the Honda dealer and ordered the same van when were told the brand new van was totaled. Then came the timing issue that they could find the Dark Cherry Pearl color we loved in a 2011 model. We waited extra time to get the color we loved and ended up with a 2012 model. (See the goodbye 2011, hello 2012 part now?!) Our new van arrived in October. We were so thrilled to have a cherry van again (that is what the kids call it). This time we added the roof rack to the top of it but is the same as the old one really.

For a family that never buys new vehicles, buying two in one year is really odd but we are so thankfully we had the super safe Odyssey in August when that accident happened. I don’t think our old van would have faired very well and I wonder how the family would have faired in it.

So we said Goodbye to 2011 in August and Hello to 2012 in October and have been loving 2012 ever since then. We will be loving 2012 for years to come as we don’t get new vehicles often so are hoping it is a good year in more than one way!! So while our Budget Pie is super tight right now with this van payment, we know it is worth it because our three little ones are safe as we drive around!

Happy New Year from us! We hope you have time to enjoy it with friends and family.

What happened in 2011 for you that changed your budget? What are you hoping for in 2012 for your budget?